The Mediterranean Sea is the largest of the semi – enclosed European seas, surrounded by 21 countries that share a coastline of 46,000 km. The region is home to around 480 million people and the environmental challenges it faces are significant. Back in 2006, the ‘Horizon 2020 Initiative’ was launched inviting all committed stakeholders to join efforts in substantially reducing pollution in the Mediterranean by the year 2020 by tackling the sources of pollution that are said to account for around 80% of the overall pollution of the Mediterranean Sea: municipal waste, urban waste water and industrial pollution. 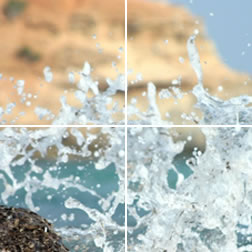 d by the Union for the Mediterranean (UfM) Ministers at the Ministerial Meeting on Environment and Climate Change in Athens in 2014. It remains one of the key flagship initiatives of the UfM since its launch in Paris in 2008, thereby making it a joint endeavour and commitment of all 43 UfM countries.

Horizon 2020 builds on existing institutions, initiatives and results, filling gaps where it could bring added value. It operates within the framework of existing and developing policy instruments, and supports the implementation of the commitments undertaken in the framework of the UfM Ministerial Declaration on Environment and Climate Change; the United National Environment Programme/Mediterranean Action Plan (UNEP/MAP): the Barcelona Convention and its Protocols; the updated National Action Plans (NAPs); the Mediterranean Strategy for Sustainable Development (MSSD 2014-2015), supported by the Mediterranean Commission for Sustainable Development (MCSD) established under UNEP/MAP), etc.

Click here for the official European Commission site on the Horizon 2020 Initiative.

The Horizon 2020 Steering Group, chaired by the UfM co-presidency (Jordan and the EU represented by the European Commission), aims at guiding, reviewing, monitoring and effectively coordinating activities that contribute to sustainable development through the integration of the environmental dimension in other sectors and within different levels of governance across the Mediterranean region. The Steering Group is responsible for the implementation of H2020. Its members participate on an equal footing and include: EU Institutions (EC, EIB, EEA), focal points of EU member states, focal points of ENP Mediterranean partner countries, other stakeholders such as IGOs, IFIs, NGOs, local authorities, private sector etc. To date eight Steering Group meetings have taken place (Marrakesh 2007, Tunis 2008, Dubrovnik 2009, Amman 2011, Barcelona 2012, Brussels 2013, Barcelona 2014, Brussels 2016).

There is also a Research component to facilitate the inflow of relevant results from research projects to the Horizon 2020 components and promote collaboration between this Horizon 2020 (Mediterranean) and DG Research and Innovation's Horizon 2020 funding programme.

During the 10th Anniversary Summit of the Barcelona Process in 2005, the Euro-Mediterranean Partners committed themselves to increasing efforts to substantially reduce the pollution of the Mediterranean by 2020 in what became known as the ‘Horizon 2020 Initiative’ (H2020). Horizon 2020 was endorsed during the Environment Ministerial Conference held in Cairo in November 2006 and was one of the key initiatives of the Union for the Mediterranean (UfM) since its launch in Paris in 2008.

2013 marked the halfway point of the Horizon 2020 Initiative. A number of assessments, studies and reports were conducted to feed into an overall Mid-term Review that was carried out during 2013-2014 to present the achievements and challenges ahead and propose recommendations for the next phase, for policy makers and other H2020 stakeholders.

The mid–term review process culminated in the UfM Ministerial meeting on Environment and Climate Change held in Athens on 13 May 2014 during which Ministers reaffirmed their commitment towards the Horizon 2020 Initiative and gave the H2020 Steering Group the mandate to develop and adopt a work programme for the second phase. Therefore a Work Programme for the 2015-2020 phase was prepared which focuses – under the different H2020 Components - on the following:

A  more  general  requirement  is  the  need  to  integrate  green  economy  principles in  the H2020 Initiative work programme. By calling for strengthening its pollution prevention dimension, Ministers acknowledged the crucial role  of  green  economy  principles  and  sustainable  consumption  and  production  (SCP)  patterns  to  prevent  the  further deterioration of the Mediterranean Sea as well as to ensure the sustainability of results (including pollution abatement investments). Ministers called for increased synergies in this area which implies adopting a broader vision and range of activities in each component.

In parallel, the National Action Plans (NAPs) were updated by all Mediterranean countries under UNEP/MAP guidance with EU support. This is an important contribution to the identification and prioritization of specific actions urgently needed and to be considered during the implementation of the 2015-2020 Work Programme H2020.

With the launch of the Union for the Mediterranean the geographic scope of Horizon 2020 was expanded to include focal points from Albania, Bosnia & Herzegovina, Croatia (not an EU Member State at the time) and Montenegro. In addition to using EU policy tools it cooperates and tries to coordinate and synergise with all other relevant programmes.

During 2009-2014 the EU has financed a project under each component, in addition to those from other sources, and particularly:

The EU is currently funding the second phases of the:

Learn more about how the actions of the Horizon2020 initiative is serving all the people of the mediterranean by protecting the environment to create a sustainable future.